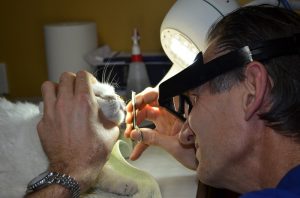 I went to school in Western Australia (Armadale), then directly to Murdoch University Veterinary School in 1983, graduating in 1987.

I was offered work in a vet practice 200km south of Perth for three years. In 1990 the rural recession made me reassess my priorities and I set up a locum business involving travelling around WA doing four- to six-week stints in practices while the owners were on holiday. I also did six weeks in Tasmania.

In 1991 I did the Aussie thing and went on a world trip, ending in the UK where I took a position in a small animal practice in East London. I worked there for 15 years. During this time I developed an interest in alternative medicine. I saw recurring skin cases, and discussions with colleagues left me dissatisfied about the treatment protocols which consisted of corticosteroids, antibiotics and flea treatments (in those days mainly sprays and shampoos). London had far worse flea issues than Tasmania and every third or fourth animal was sensitive to their bites. Desentisation via injection was just being used, so I started to use it too; then investigated the principle of hormesis – that same can be used to desensitise same, in very small quantities. This led me to homeopathy where like treats like.

I completed a degree in homeopathy in 2003 and then looked further at acupuncture, Western herbs and then Chinese herbal medicine, and developed a paradigm shift in looking at animal disease, essentially outside the veterinary ‘drug box’. Diagnosis is the same but now I have more tools to work within the treatment of our animal companions. I have yet to apply this the plant kingdom but apparently, homeopathy can also be used there.

In 2006 I moved to Tasmania with my family and established the SBHVC practice. I’ve treated large animals and wildlife here, but specialise at the moment in domestic pets: dogs, cats, and pocket pets like guinea pigs and rabbits.